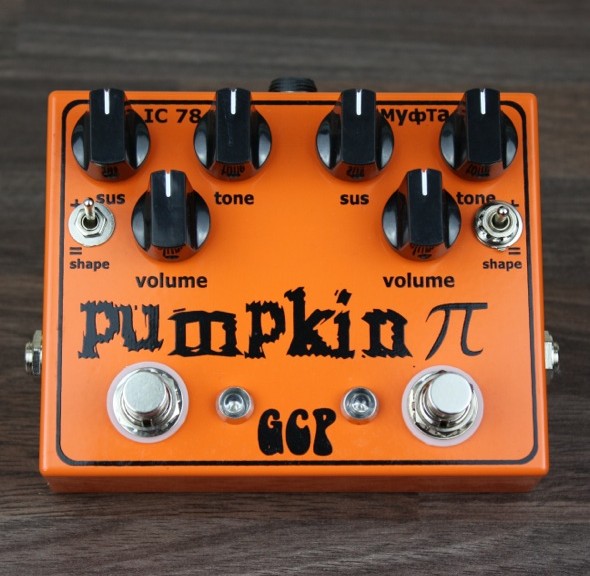 The ‘Pumpkin Pi’ is a twin channel muff pedal that brings together 2 classic muffs into one distinctive pedal. The first channel is the classic ‘Green Russian muff’ loved by so many players such as Dan Auerbach of the Black Keys & Jack White. We’ve added a 3 way tonal switch which allows you to switch between a10db’s & 4db’s boost to a classic scooped Muff tones.

The second channel is the ‘IC78’ muff. This muff uses an Integrated Circuit or IC chip rather than the usual Transistors to give you a more modern sounding muff. This type of muff was apparently used by the Smashing Pumpkins when recording their Siamese dream album. We’ve added a tone bypass switch to the ‘IC78’ for a more direct signal path with added grit.

Both these channels work independently of each other but we’ve built the ‘Pi’ in such a way that it allows you to cascade the ‘Russian’ into the ‘IC78’ giving you a super high gain fuzzilicious muff that still retains all the classic sounds of a muff but with the advantage of taking your sound to new tonal grounds.

The Pumpkin Pi is constructed in ‘true bypass’ removing the possibility of any tone suck from your original signal when the pedal isn’t engaged.