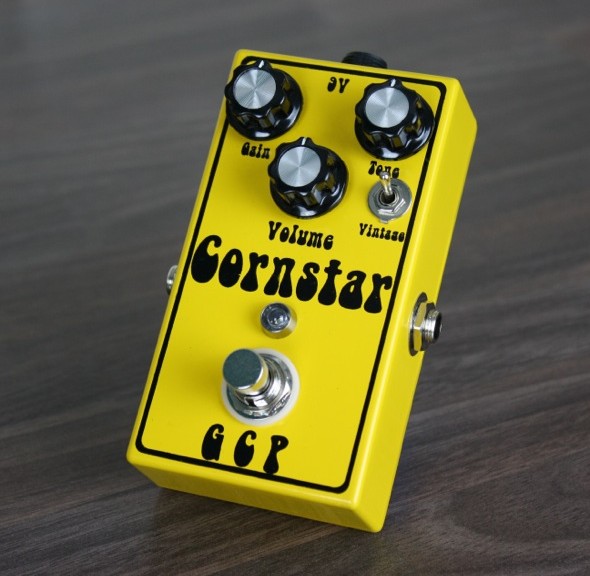 The ‘Cornstar’ started out as our take on the ‘amp in a box’ pedal. That amp being a Marshall Plexi. As the pedal took shape and was developed and tweaked, it became more than just a Plexi clone pedal & took on a whole character of its own, creating in our opinion a fantastic overdrive/distortion pedal.

Yes you can get a nice Marshall-esque sound from the Cornstar, going from a vintage pushed Plexi to a more aggressive modern sounding amp with more gain and bite. Some of our other supporters have likened it to a driven ‘Cornford’, ‘Vox’ or ‘Tweed’. We just think it’s a great sounding pedal.

We’ve added a vintage switch to flip between the two sides of the pedals character. It also adds, what we like to think of as a bit more depth to the available tone pallet.

The gain on the Cornstar starts right from zero. The gain will increase very very subtly until it reaches 2 O’clock when it starts to really open up. Don’t worry, it was purposely designed to work that way to keep the gain very focused & tight. Your Cornstar is working exactly how it should. The tone control on the Cornstar is also subtle but very usable & can help stave off ’option paralysis’ by allowing you to plug in & play without spending all day twiddling with setting. Who wants to do that?